Born in Pokój in 1931. She studied at the Academy of Fine Arts in Wrocław, under the direction of Professor Stanisław Dawski, in 1951-57. After graduation, she started working with the ceramic industry, organising a design centre in the Bogucice Porcelain Plant in Katowice-Bogucice. Her most recognizable projects from that period include the intimate sculpture of female figures, which were inscribed in the current, and the "Luna" and "Epos" tea sets.
Since 1966 she was employed as a designer at the Ząbkowice Glassworks in Dąbrowa Górnicza, where together with her husband, Jan Sylwester Drost, also a designer, they completely changed the face of Polish pressed glass, making a real revolution in this field. Until now, seen as a "crystal for the poor", it did not have a very good reputation. It was only the improvement of the production process and the introduction of a number of simple but surprisingly effective innovations that opened completely new possibilities for designers.
Eryka Trzewik-Drost has presented a more sculptural approach when designing glass forms, typical of ceramics, repeatedly making plaster models by herself. She specialised in sets of small applied forms, thick-walled, diversified in colour. In the lines of her designs you could see a "woman's touch", especially in the case of patterns adorned with plant motifs. She also created figurative objects, such as the set of "Family" figurines or the "Mexican woman" candlestick, as well as decorative plates with the representation of a woman's face or a pipe stand in the form of a bird.
Its unique glass, created at the Ząbkowice Glassworks or during open-air glassworks, usually took the form of massive, hand-moulded, decorated with complicated metallurgical techniques vases or sculpture objects glued from several elements. Occasionally she also made spatial compositions for architecture. In addition to designing ceramics and glass, she also dealt with graphic design and artistic jewellery. He has been a member of Association of Polish Artists and Designers since 1957.
Eryka Trzewik-Drost took part in most of the exhibitions and glass presentations in Poland, as well as in many such events abroad, winning a number of awards and distinctions for her applied glass projects.

Decorative forms, Glass Workshops HSK Violetta, 1994, lead glass, stained, frosted, slowly formed, height of 18 cm, 26 cm, 31 cm.
Three compositions in the form of colourful statuettes, set on dulled, round bases. Two club-shaped forms, one round, made of thick-walled transparent glass, rounded at the top. Along the rounded edges, coloured overlays are applied, which form a pattern of non-bloomed flower buds. Blue and honey-coloured transparent glass refracts the light, creating unusual reflections of transparent glass and adds depth to the compositions. The colourless, round form has a similar light effect. 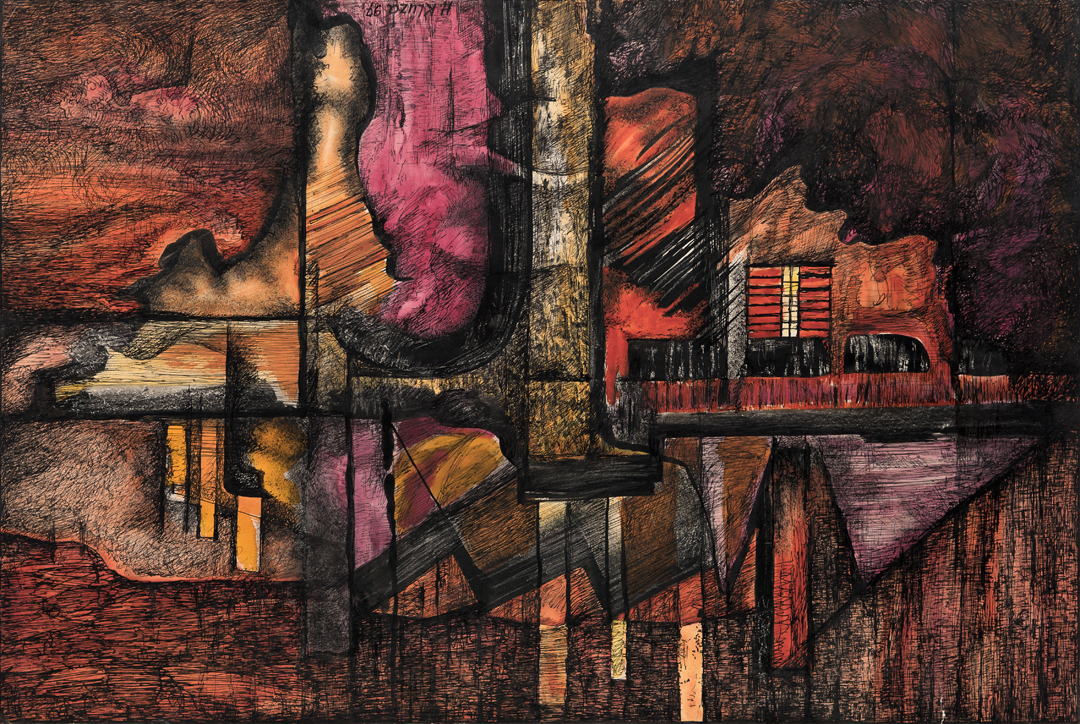